20 hours in the air and two full days later and I have officially made it to SYDNEY!!! To say I am excited would be an understatement. I have only been here a mere few hours and have already fallen in love with the city.

My journey over here was pretty uneventful. I flew Virgin America from Chicago to LAX and watch “Gifted” and “The Accountant”. Both I would highly recommend. Then it was a quick 2 hour layover in LA before boarding my Qantas flight straight to Sydney. The flight was almost full, but god was on my side last night apparently because I was able to get a window seat with no one next to me. I manage to stay awake until dinner service, which was salmon with vegetables for me, before passing out for a whooping 10 hours of the flight. I woke up and they were getting to ready to serve breakfast! I normally sleep very well on flights, but 10 hours, wow I impressed even myself with this one. Breakfast was a fruit platter with yogurt. No movies were watched on this flight as I literally slept almost the whole thing.

Once I got to Sydney I breezed through customs and snagged my bag before setting off to find the train. I have heard from many that the public transportation in Sydney is stellar and it did not disappoint. Easy and very cheap to get around. I can get almost anywhere in the city for under $5. 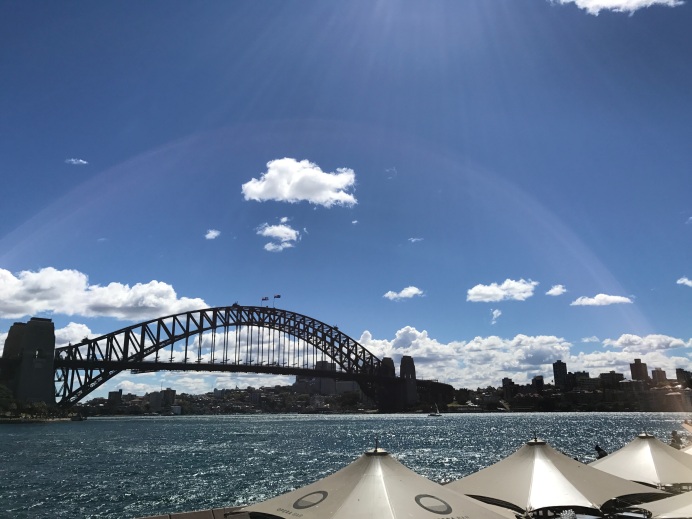 I arrived at my hostel at the ripe hour of 7:30am – too early to check in, so I wandered to the breakfast area in desperate need of some coffee. Once there I made quick friends with a girl around my age from Scotland. She was suppose to fly to Brisbane this morning, but her flight had been canceled due to high winds in Sydney. Both of us had nothing to do and decided to set off on a walk to see all the tourist areas Sydney is famous for. She had been living here for 8 months and therefore had been to all of them numerous times which was great for me because I basically had my own tour guide. We wandered into Darling Harbor before heading over to see the famous Opera house.

Now it is 3pm local time for me and I am desperately fighting the urge to take a nap in hopes of getting over jet lag within a reasonable amount of time. Stay tuned to see if I succeed.

2 responses to “My Journey to Down-Under”

Where in the world is Hannah